Which animals does Cas mention in Season 7? (1 point per animal, 1 point for the quote(s))

What is the first episode where we see Bobby's flask in Season 7?

Who said this in what episode and to whom?

In which episode are Sam, Dean, and Bobby called Bigbird, Kendoll and creepy uncle? And by whom?(2 points)

Who says this and in response to whom&what in what episode?(4 points)

Who does Hellucifer turn into in Season 7? (1 point per person)

Which episodes of Season 7 feature gods? Which gods? (1 point per episode, 1 point per god)

What are the things we find out about Sam and Dean's childhood in Season 7, and what episodes are they found in?
(1 point per info, 1 point per episode)

What episode is this screencap from? 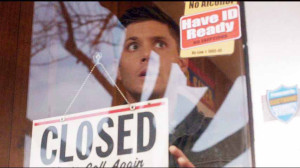 In which episode of Season 7 is there both rain and snow?

Which episode is this gif from, and in response to what line by whom? (3 points)

Which episode uses Dean's Family Theme in it's THEN interlude?

Which episode is this screencap from? 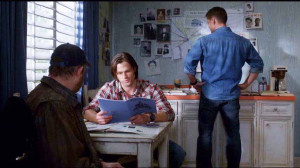 Which episodes of Season 7 are about demons (not including Crowley)?

Which episode is this song used and in what scene?
( Collapse )

In which episode did Bobby kiss someone this season?

Our 30 hours of fun are finished and here I am with my usual final post.

My sincere apologies for the congestion I've caused in your fpages. *repeated deep Japanese bows* Thank you so much for putting up with them.

Also I want to thank you so very much, everyone, for participating. As always, it was wonderful spending this time with you and trying to find quizzes that you might enjoy.

I usually do a final quiz of funny or OPT scenes at the end, so in the tradition, I'm giving out one point each for favorite scenes that you might contribute - funny or heartbreaking - and another point for a screencap or gif to go with it. The way to include an image in comments is to put the URL within the code as follows:

Feel free to use images from my posts. (right click, copy URL address, paste in comment within code.)

The deadline is exactly 6 hours from now. I won't be counting points for any other submissions after that although you are welcome to post! If there are any other questions unanswered before that, please feel free to fill those in too.

I'll be counting up points and posting results on Monday (or possibly Tuesday - I have a barbecue on Monday and might not have the time to go through everything properly) and starting Season 8 on the 18th. Thank you so much everyone!! *hugs all around*
Collapse