Which episode has a character by the name of Dr. Silver?

What do Sam and Dean break in The French Mistake and what is that a reference to? (3 points if you can get both "references.")

Which episode and scene is this screencap from?(2 points) 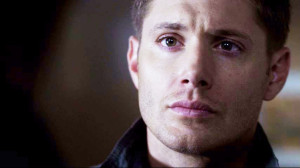 Who says this in what episode?

" You have me confused with the other angel - you know, the one in the dirty trenchcoat who's in love with you. "

Which episode is named after an attraction at Disneyland?

Who says this, to whom, in what episode, and what is the next quote?(4 points)

Who's hand is this, and in what episode and scene? 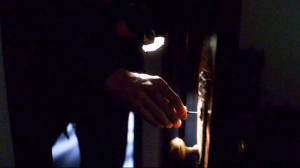 Which book (author and title) did Sam find in Robin's bar in The Man Who Knew Too Much?

In which episode was Castiel described as the Angel of Thursday, and by whom?(2 points)

In which episode does Sam buy Dean a wrap(sandwich)?

Which episode is this screencap from? 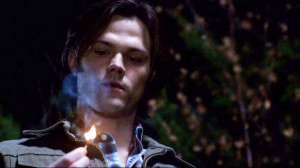 What kind of woman does Soulless Sam like, and in which episode does Dean note this?

Who says this about whom in which episode?

In which episode does Sam tell Dean to meet him in Easter, Pennsylvania?

Which episode's title is the title of a song by Madonna.

What's the name of the monster in All Dogs Go to Heaven?

What episode is this from and what is Sam saying? 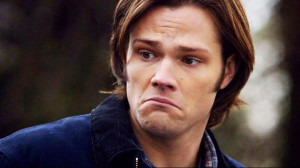 What episode and scene is this from, and what is it a reference to?

"Beat me with a wire hanger, answer's still no."

What is a "tell"? And in what episode and by whom was it mentioned?

In which episode does Dean act rape-y?

Name the foods mentioned or appearing in Appointment in Samarra - include who it was mentioned by if mentioned, and include scene(1 point per food per scene)

Who says this to whom in what episode?

You don't know half the things that I know, kid.

Which movies are referenced in Mannequin 3: The Reckoning? Include quote or place. (1 point per movie)

What's the name of the monster in You Can't Handle the Truth?

Approximately what time is it when Atropos tries to kill Sam and Dean the first time?

In which episodes do we see Djinn? (1 point per episode)

In which episodes do we see vampires? (1 point per episode)

Sorry, there was a posting error - out of order a bit!

Who says this, to whom, in what episode?(3 points)

"I thought for sure death had you by the twins."

In which episodes are there references to Clint Eastwood? (one point per episode)

List episodes that Dean kisses or is kissed and by whom this season.

List the eps where Sam kisses or is kissed and by/with whom this season.

List episodes in which Castiel kisses or is kissed this season, and with/by whom.

How many episodes didn't have music this season?

List the episodes where whiskey was mentioned or drunk or otherwise appeared this season.

List the episodes where we saw the demon knife this season.

Which episodes had either or both boys summoning someone this season?

List the episodes in which Bobby kissed or was kissed and by whom this season.

What foods appear or are mentioned in Weekend at Bobby's (you may include condiments).

Our time is coming to an end so, I here I am with our usual final post.

My sincere apologies AGAIN for the congestion I've caused in your fpages. *repeated deep Japanese bows* Thank you so much for putting up with them.

Thank you so very much everyone for participating. It was wonderful spending this time with you and trying to find quizzes that you might enjoy.

I usually do a final quiz of funny or OPT scenes at the end, so in the tradition, I'm giving out one point each for favorite scenes that you might contribute - funny or heartbreaking - and another point for a screencap or gif to go with it. The way to include an image in comments is to put the URL within the code as follows:

Feel free to use images from my posts. (right click, copy URL address, paste in comment within code.)

The deadline is exactly 4 hours from now. I won't be counting points for any other submissions after that although you are welcome to post! If there are any other questions unanswered before that, please feel free to fill those in too.

I'll be counting up points and posting results over the weekend and will be taking a week break to start Season 7 on the 12th. Thank you so much everyone!! *hugs all around*

A bit less than one and a half hours left till the end of quizzes, and there are quite a few questions that could have more answers :)

It's a bit late over here so I'm going off to bed but thank you again to everyone for your participation and forbearance!